These are a substantial series of cliffs which have been quarried extensively in the past for aggregate, which is thought to have been transported over the River Wye to Hadnock. The cliffs expose about 12 m of Avon Group with 15m of the Black Rock Limestone above. A higher benched level may be formed of Gully Oolite. The Lower Limestone Shale consists of pale grey laminated shales with a silty horizon topped by massive grey dolomitised limestone with voids. Wavy bedding is apparent in places and stylolites have formed at the junction between dolomite beds.

Dolomite – Carbonate mineral containing calcium and magnesium. Also used to define a rock type that is dominantly composed of this mineral.

Stylolites – Serrated surfaces that develop in sedimentary rocks which form when increased pressure causes part of the rock to dissolve (a process known as pressure solution). 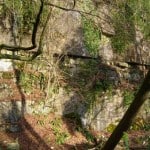 The boundary between the Avon group (below, pale grey) and the Black Rock Limestone (above, darker grey). 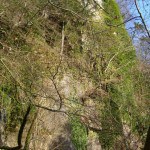 General view of the exposure at Severn Sisters Cliff quarries.