In Slasher’s Quarry, Precambrian Malverns Complex rocks were quarried for road stone.  The general view today is of green/grey-weathering, massive, jointed and sheared dioritic rocks with pink granitic (felsite) veins visible locally.  In the south-west corner, there are extensive outcrops of an ultrabasic rock, which consists almost entirely of the dark green mineral hornblende (the rock is known as a ‘hornblendite’), with small amounts white mica and even smaller amounts of pyrite and chalcopyrite.  The hornblendite is cut by later granite and quartz pegmatite veins and contacts with the other rocks are mainly faulted. At the northern end of the section, there is an example of one of the few well developed mineral veins intruded into the Malverns Complex, which consists mainly of pyrite and is in direct contact with quartzite.  In the north-east corner of the quarry, diorites are intruded by pink granite and later basalt/dolerite. A late fault striking north-south and dipping 45o to the west displaces these intrusions and shows evidence of some of the complex history of earth movements which have affected the rocks.

A fault line runs along the east side of the quarry separating the Malverns Complex from Cambrian Hollybush Sandstone in its east face.  These outcrops of dark green coloured sandstone are now rather overgrown.  There are also small outcrops of Silurian fossiliferous limestone in the north east face of the quarry. This unit has a basal limestone conglomerate containing pebbles of the underlying Hollybush Sandstone, on which it rests unconformably.  A rich fauna of brachiopods and conodonts, together with some graptolites found in the limestone, allow correlation of these beds with the Wyche Formation of Late Llandovery Series (Early Silurian) age.

About 4m of Head, formed by frost shattering and downslope movement of debris during recent ice-ages, are seen at the gate, and consist of red-brown silt with clasts of Malverns Complex.

Ultrabasic – An igneous rock that is dominantly composed of iron and magnesium-rich minerals and contains only minor amounts of SiO­2-rich minerals, such as feldspar (they will never contain the mineral quartz).

Pyrite and chalcopyrite – Sulphide minerals of iron (or fool’s gold) and iron-copper respectively.

Conodonts – Teeth sets belonging to an extinct group of early vertebrates similar to the modern-day hagfish. 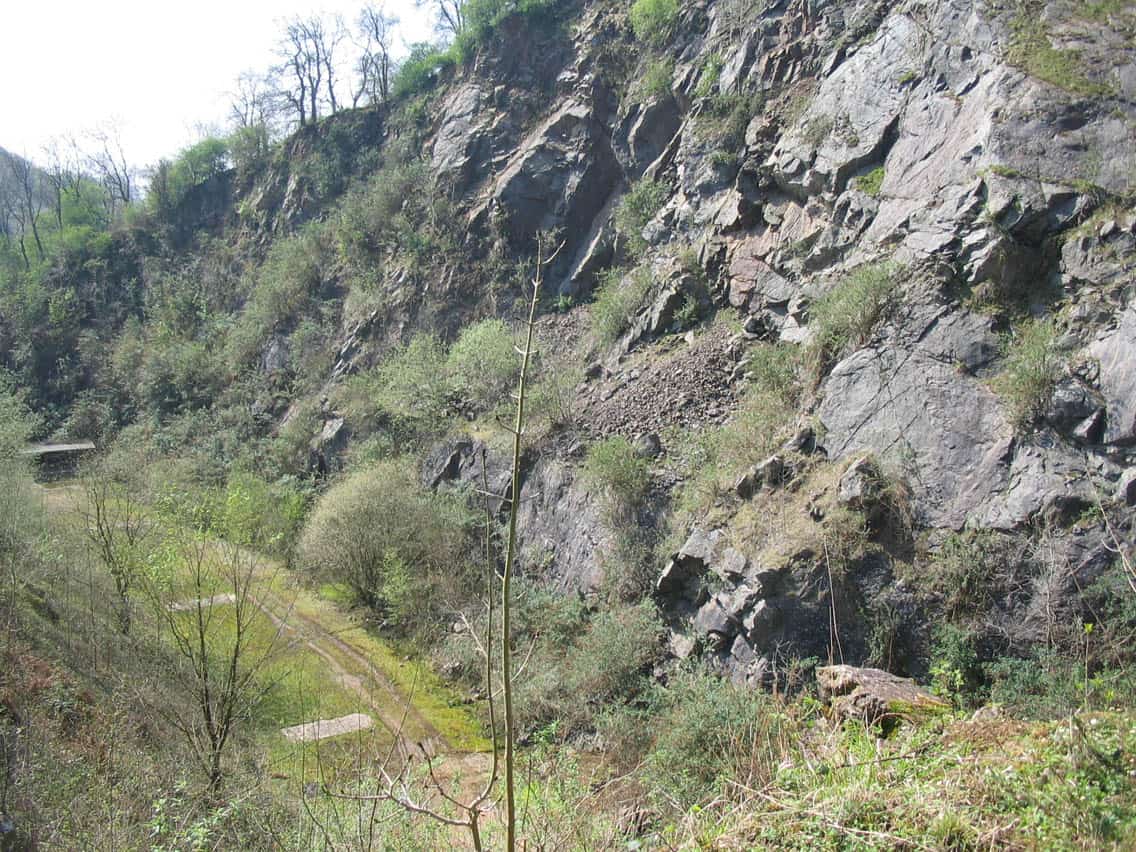 A view into Slasher’s Quarry from above the north face. 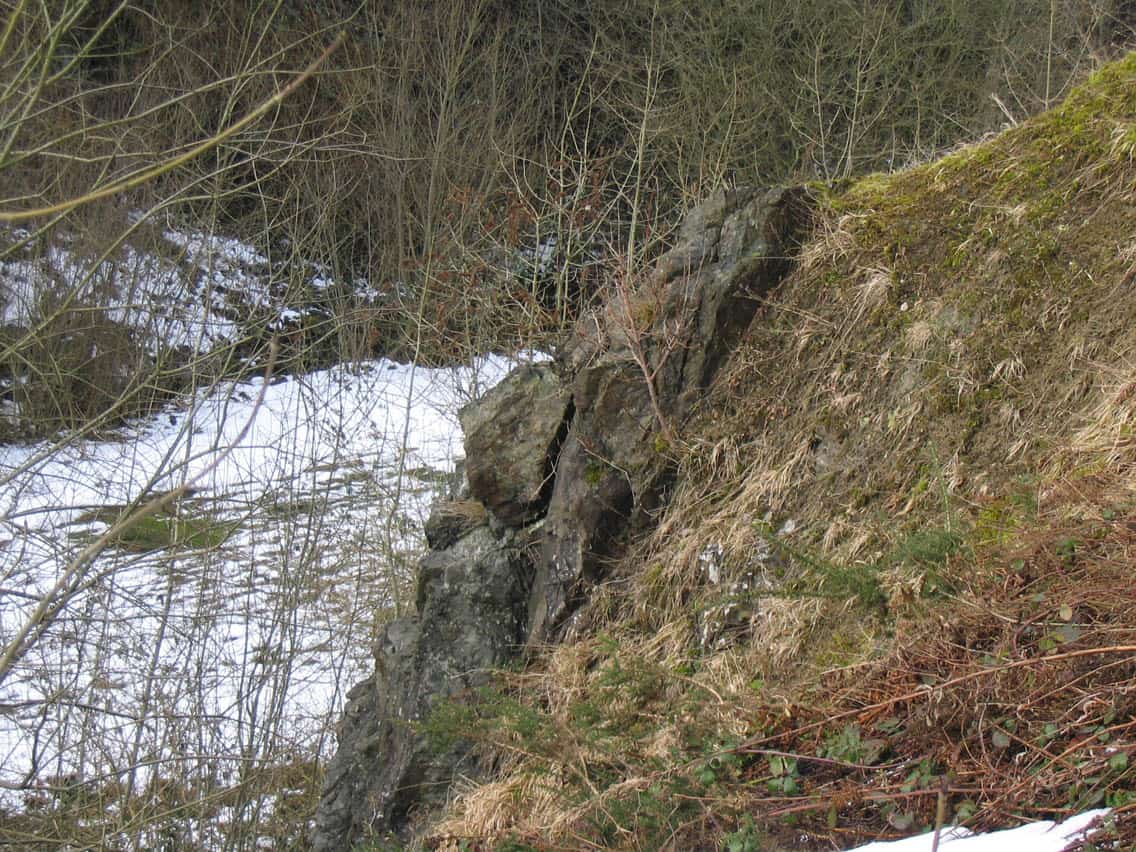 An outcrop of Cambrian Hollybush Sandstone on the east side of Slasher’s Quarry. 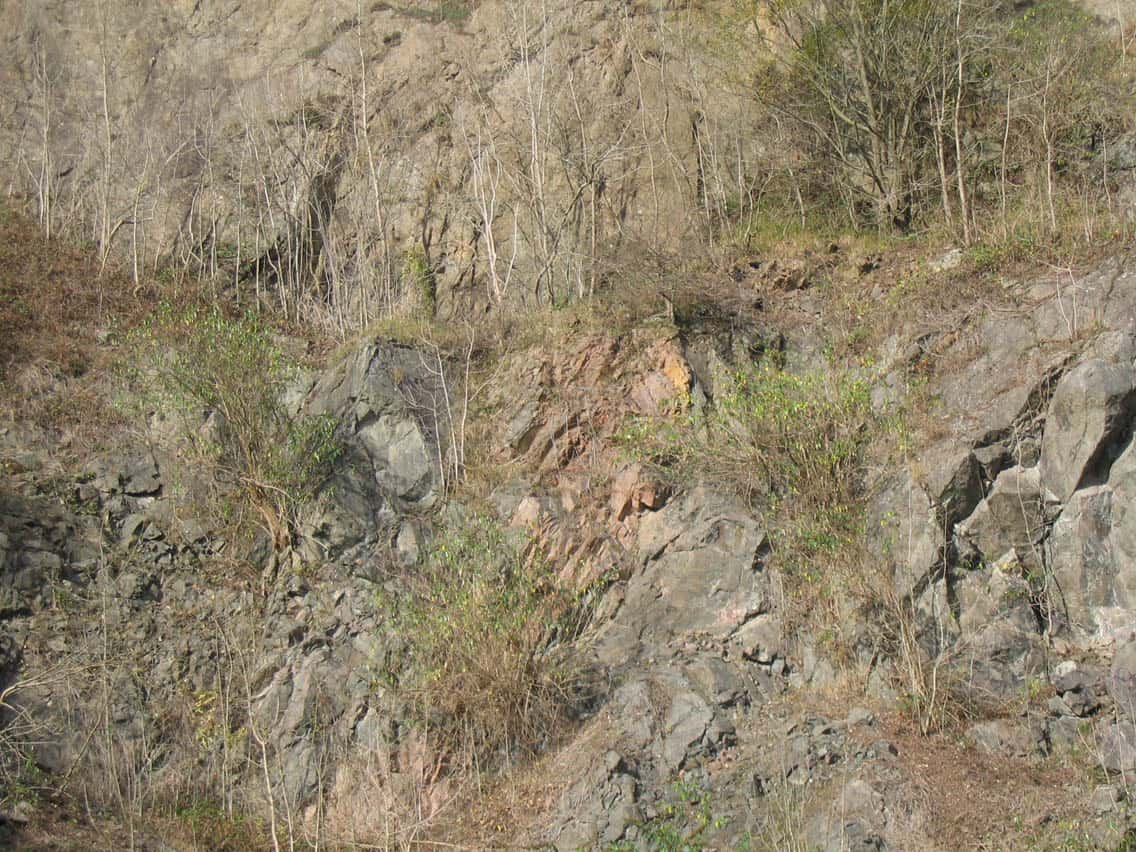 A view of the north face of Slasher’s Quarry.