Abberley Hall East is a long, linear quarry, set in woodland to the south east of the Abberley Hall School. Quarrying is thought to have ended in the early 19th century and was marketed as the ‘Valley of the Rocks’ when the estate was sold in 1836.

The site is a long, linear quarry composed of the Wenlock Limestone Formation that is approximately 500m long and 40m wide. The best exposed faces are on the western side of the quarry, which are approximately 30m high. They comprise overturned beds of nodular limestone that are oriented near vertical in places and form part of a limb of a local fold structure. Smaller faces can be seen high up on the eastern side of the quarry, with the best of these exposures at the southern entrance. The limestone in the western face is a greenish grey colour and has a silty, nodular fabric. The nodules when split are hard, finely crystalline and grey in colour. The beds in the eastern face are smaller and reveal a highly fossiliferous surface containing some brachiopods and many crinoidal columns, some of which reach up to 2cm in diameter. In the centre of the west face there is a vertical fault filled with the mineral calcite.  This bisects the face and extends to the top of the exposure.

Fold limb – The part of the fold between the hinges (hinges: the location of greatest curvature of a folded surface) 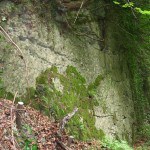 Nodular limestones of the Much Wenlock Limestone Formation at Abberley Hall East quarry.

British Geological Society (1960), Geology of the country around Droitwich. Sheet 182

Phillips, J., 1848, The Malvern Hills compared with the Palaeozoic districts of Abberley, Memoirs of the Geological Survey of Great Britain and of the Museum of Practical Geology London. Vol. II, Part 1.