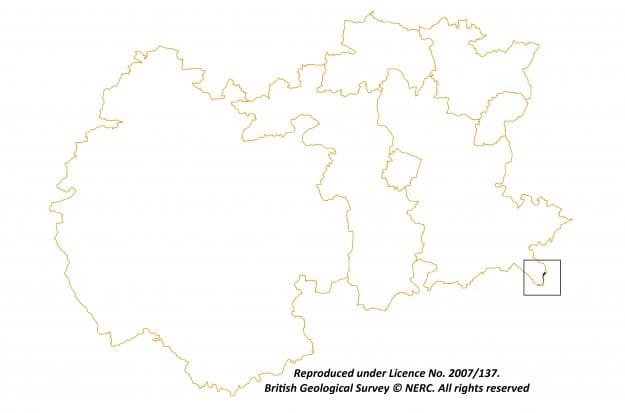 The Aston Limestone Formation forms the middle unit of the Mid-Jurassic Inferior Oolite Group. The Group is not very widespread, occurring only in the southeast corner of Worcestershire, where it forms outlying hills and escarpments in areas such as Bredon Hill and Broadway. The Aston Formation is almost exclusively seen in outcrop at Broadway Quarry.

The Formation comprises grey and brown, rubbly, variably shelly, ooidal limestones with sandy and marly beds in parts. This formation is only exposed in Broadway Quarry and the surrounding area, and consists of four members.

This is a grey, very shelly, moderately sandy, peloidal and ooidal wackestone, packstone and grainstone.

This is a pale brown-grey, well-bedded, medium-coarse grained peloidal and ooidal grainstone. This is the only member exposed outside of Broadway Quarry and is found along the top of Broadway Hill.