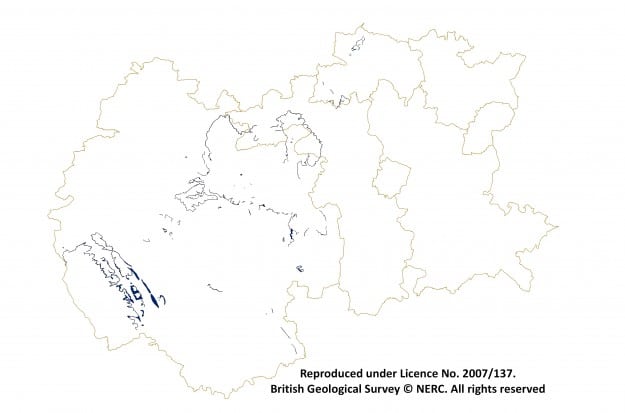 The Bishop’s Frome Limestone was formed by the precipitation of calcium carbonate in the Raglan Mudstone and its overlying soils. This resulted from the movement of ground water in the unsaturated zone between the top of the water table and the land surface. Fluid movement brought soluble calcium carbonate from lower levels and deposited it through evaporation, close to the ground surface, forming a limestone deposit within the rock and soil called a calcrete. The calcrete mudstones of the Raglan Mudstone Formation are highly variegated in tones of purple, green, blue and red. If the calcrete development is sufficiently prolonged, the calcrete forms a greater percentage of the rock and is said to be more mature. The Bishop’s Frome Limestone is the thickest and most mature of the calcretes in the two counties and as such, can be traced across the landscape.