The Warren House Formation crops out in the Malvern Hills from east of Herefordshire Beacon down to Hangman’s Hill in the south. At Broad Down Quarry, excavations revealed a sequence of ignimbrites and tuffs with an easterly dip ranging from 45°-~90°. It exposes unstructured, pink and blue-coloured crystal-lithic tuffs with a uniform composition. A dolerite dyke, somewhat sheared, is also found in the quarry, and the mineral epidote is fairly prevalent.

In the northwest part of the quarry, ignimbrite flows of Warren House Volcanics extend from the northern entrance around the northern, western and southern walls.  The ignimbrites are pink in colour due to hematite staining.    The freshest rocks are exposed in this part of the quarry are felsic to rhyolitic fragmental tuffs with rounded quartz xenocrysts. The flows are massive and fairly uniform.

In the southeast part of the quarry, dolerite predominates over ignimbrite.  In places, large blocky xenoliths of ignimbrite are entrained in the dolerite intrusions, but a lack of complete exposure prevents a definite conclusion from being drawn. The dolerite itself is fine-medium grained pale pink to yellow-brown felsic tuff. This is overlain by very fine-grained, greyish purple tuff of more intermediate composition, indicating the presence of compositional and grain size banding. The junction between these lithologies dips about 20° SE. The units are cut by thin epidote veins and East-dipping shear planes of inferred Variscan origin, which led to intense tectonisation in the volcanics at this site.

Xenocryst – Crystals incorporated into the magma from surrounding rocks

Variscan – Descriptive term for rocks/structures that formed during the Variscan orogeny, a period of mountain building in central Europe, North America and southern England that took place between 380 and 280 million years ago. 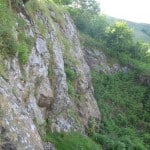 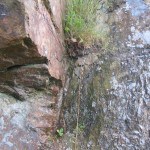 Boundary between the pink-brown felsic to rhyolitic (acid) ignimbrite (left) and the blue-grey intermediate ignimbrite (right). 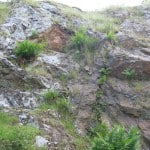 Dolerite dyke intruding intermediate ignimbrite at Broad Down Quarry. The dyke is oriented near-vertical in the central part of the photograph.

Next Post Abberley Hall East (Valley of the Rocks)