Broadway Quarry is located within the Cotswolds Area of Outstanding Natural Beauty and lies adjacent to the Cotswold Way, one of the National Trail walking routes. The Quarry has been in operation for some 120 years and has extracted limestone for both aggregate and building stone. It provides an excellent natural environment resource and for these reasons the site is designated as both a Local Geological Site (LGS) and Special Wildlife Site (SWS).

Broadway Quarry has exploited Jurassic limestones from the Birdlip, Aston and Salperton Limestone Formations of the Inferior Oolite Group. The existing quarry can be divided roughly in half by a fault that runs WNW-ESE across the site. Rocks on the south side of the fault are displaced downwards by 22m to 25m and the Aston Limestone is folded into a small syncline in the east face of the Quarry. The fold and fault run parallel to each other, leading to the suggestion that the fold formed as a result of flexure in the crust at the time of fault movement.

The units in the quarry are present as a series of fossiliferous ooidal limestone with occasional interbeds of sandstone and shale. Of notable mention is the Harford Member, as Broadway Quarry exposes one of the beset sections of the unit. Here, the Harford Member comprises a ~8m section of sandstones and limestones, topped by a series of mudstones. The top unit is some 3.3m thick and contains large black masses of lignite, giving it a distinctive dark grey colour. As a consequence it stands out visually from the light coloured limestones and sandstones around it. The nature of the Harford Member indicates a change in environment at the time of deposition. In contrast to the shallow marine limestone of the other units, the presence of lignite indicates more terrestrial conditions and an environment restricted in oxygen – possibly a freshwater lagoon. The sands lying directly below the mudstone are unconsolidated, suggesting a deposition on a beach or nearshore environment.

Ooidal limestone – a limestone that is made up of small, pellets of limestone called ooids. Ooids are formed in clear, shallow marine shoals when a small nucleus is rolled around by waves and currents in carbonate-rich sea water. They increase in size by ‘snowballing’ and are not formed by biological activity.

Lignite – also known as ‘brown coal’. This is a type of immature coal formed from the remains of plant matter deposited in a coastal/deltaic/swampy environment. 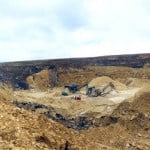 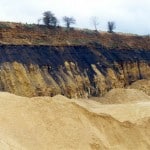 General view of the quarry floor with piles of aggregate in the fore- and mid-ground. 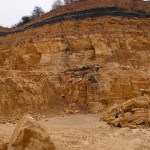 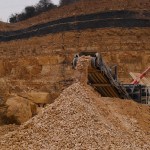 Rock being crushed for aggregate. 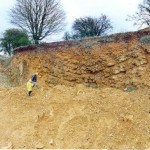 Folded structures in limestone beds have been exposed by quarrying.