The Carboniferous marks the time in which there was a sharp drawdown of atmospheric CO2. This produced cycles of glaciations and also led to the deposition of the massive coal measures that were subsequently exploited during the industrial revolution. The rocks of this period crop out in the north and north-western part of Worcestershire and are centred on the Wyre Forest Coalfield. They consist of deposits laid down in a flat, swampy, deltaic environment, ideal for coal formation.

The Etruria Formation underlies the current extent of the Wyre Forest and continues south to Ribbesford, Heightington and Bliss Gate. It consists of red and grey mottled mudstones with impersistent bands of sandstone (also known as espleys) that occasionally contain pebbly beds. These lithologies have been extracted for aggregate at Callow Hill Quarry. The unit is also notable for its absence of any coal seams, which is an uncommon attribute in Carboniferous rocks of the West Midlands. The presence of red beds (from oxidised iron) suggests the sediment was well oxygenated and therefore no coal could form. The muddy nature of the rock ensures that exposures are rare and very poor when found, which is mainly in forest road cuttings, stream sections and a small number of quarries. The top of the Formation is exposed at the Eymore Railway Cutting where a marine band is seen, marking a key time when sea-level rose and flooded the delta-flats for a brief period. 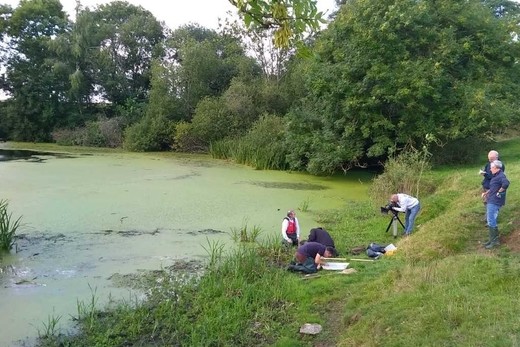