Gardiners Quarry is one of many aggregates quarries that can be found across the Malvern Hills. Found on the western side of the hills, it is a small quarry; 30m across and 15m high. Currently the quarry is used as a Malvern Hills Conservators car park, as it one of the main points of access to the hills above.

The dominant rock type in Gardiners Quarry is diorite belonging to the Malverns Complex. A metadolerite dyke is located in the centre of the quarry.

Throughout the quarry there is also a series of pegmatite dykes. Made of a coarse granitic material, these pegmatites cut through the diorites that compose the majority of the exposure within the quarry. Muscovite, together with minor amounts of biotite, chlorite and epidote can be found as accessory minerals

In the south eastern part of the quarry there is a large granitic intrusion which has been sheared intensely. This zone of shearing is thought to be the continuation of the NW-SE trending Colwall Fault; a normal fault that runs through the village of Colwall, north-west of Gardiners Quarry.

Both the diorite and granite within the quarry have a sheared fabric. This shearing occurred during the first phase of metamorphism experienced by the rocks of the Malvern Hills. The intensity of shearing varies throughout the exposure. The shearing has also made rock boundaries and the relationships between rock units hard to determine.

From the quarry, the landscape of Herefordshire can be viewed, with the prominent ridges made of Silurian limestone running parallel to the Malvern Hills. Beyond these ridges the Woolhope Dome and Shucknall Inlier can be identified, with the flat Herefordshire plain in the distance. On days where the visibility is high, the Black Mountains of the Welsh Borderlands can be seen.

Normal Fault – Movement along a line of weakness in the Earth’s crust where the hanging wall (land on top of the fault) is displaced downwards relative to the footwall (land underneath the fault).

Inlier – An area of older rocks surrounded by younger rocks 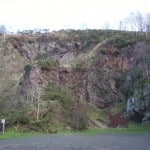 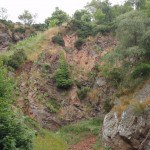