The best exposure of the Kidderminster Formation is seen in a disused quarry on the grounds of the Hagley Hall Estate.

The exposure comprises nearly 10m of continuous section and exhibits a mostly clast supported conglomerate with a fine, poorly cemented sandy matrix. The unit is red in colour indicating the presence of oxidised iron in the rock. The distribution of clasts varies and in some parts, bands of matrix supported conglomerate become pre-dominant. Clasts consist of rounded to subrounded pebbles composed of quartzite and lithic fragments, possible of igneous rocks and limestone. Size averages ~4cm, but varies from 1cm to 20cm. The unit is generally unsorted, although possible imbrication is present in places.

Lithic fragments – Pebbles that are made of pieces of rocks that have been eroded and incorporate into the conglomerate.

Imbrication – Vertical stacking of clasts in a sedimentary rock formed by currents. 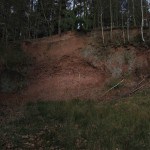 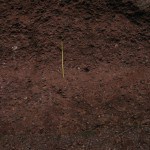 Close-up of pebble beds in the Kidderminster Formation. Image shows clast-supported rounded to subrounded pebbles of quartz (white) and other lithic fragments (brown) in a matrix of fine red sand. The conglomerate at the top and bottom of the photograph is clast-supported, with a more matrix-supported band in the middle denoted by the area with fewer clasts. Scale: Tape measure ~30cm

Whitehead, P.F. and Pocock, R.W., 1947, ‘Geology of the country between Dudley and Bridgnorth’, Memoir of the British Geological Survey, British Geology Survey, London.