At this disused quarry, the Amestry Limestone Formation has been overturned and the beds are highly fractured with some mineralisation in the joints.  The beds exposed in the quarry show a ~15m high section of calcareous siltstones and silty limestones.  The lowest part of the section comprises thinly bedded silty limestone and limey mudstones that contain abundant brachiopod shells. Above these, a ~8m succession of thinly bedded limestones contains increasing amounts of sandy material moving up through the sequence.  This is overlain by ~13m of limey silt that contains abundant examples of several species of brachiopod, as does the topmost layer of silt and fine-grained limestone. Although the sequence is similar in terms of rock type, the layers contain distinct assemblages of certain species of the brachiopod animal, which have been used to date the rock unit here to the mid-Silurian period of geological time. 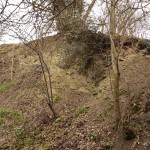 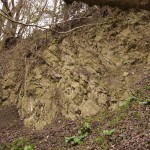 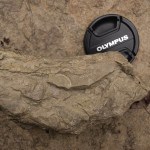