This long-disused quarry has been extracted on two levels and exposes low 50cm-2.5m faces that have been largely obscured by vegetation. The best exposure is seen on the south face of the quarry, where a 2.5m high face exhibits massive, fine-grained, buff-coloured sandstones that are separated by thin layers of red-coloured shale. Well-sorted sandstones form the dominant lithology at this site and form beds ranging in thickness from 20cm in the upper quarry, to greater than 1m thick in the lower quarry. The rocks at this site have been reported in the literature as Cowleigh Park Formation, however direct field observations indicate that the units are more similar to the younger Wyche Formation, which crops out about 50m to the south of the quarry. 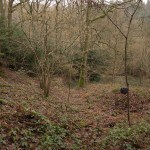 View from the back of the upper quarry. 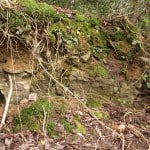 Exposure of well-bedded fine sandstone at the back face of the quarry. 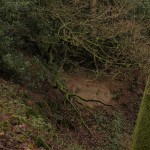 Main exposure on the south face of the quarry. 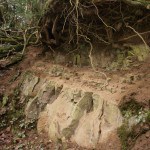 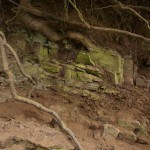 Detail of shale interbeds in the south face exposure.