The quartzite in Barnt Green Road Quarry is pale grey to purple in colour and interbedded with thin shale/mudstone layers which could possibly be volcanic tuffs. The quartzites are immature to submature and forms flaggy beds 3-6cm in thickness that are separated by layers of sandy shale. Some of the quartzite bands are soft in texture and are composed of quartz and volcanic or tuffaceous material. The shaley layers are predominantly purple in colour and micaceous. The top most beds of the quarry face are sharply bent over from the south-east to the north-west in small recumbent folds. These overturned folds are well presented in Lapworth’s 1882 paper.

Micaceous – A rock composed of a high percentage of the mineral mica (silicates of aluminium and potassium, and with magnesium and iron in the dark varieties).

Fold – A curved or angular shape of an originally planer geological structure.

Axial surface – The imaginary surface within a fold passing through and comprising all the hinges of the folded bedding surfaces. 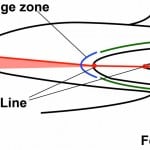 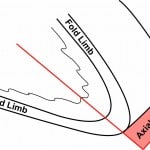 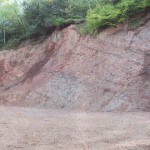 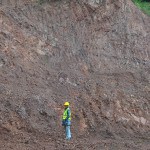 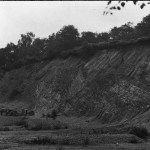 Picture taken in the late 19th century (possibly taken by Lapworth) of the overfolding of the quartzite. Courtesy of the Lapworth Museum.

Lapworth, C. 1882. On the discovery of Cambrian rocks in the neighbourhood of Birmingham. Geology Magazine, 563-566