The Lickey Quartzite Formation seen at the site is a pale grey, generally massive bedded (up to 50cm) sedimentary rock, with occasional thin silty beds occurring within the unit. The quartzite is a medium-grained, crystalline sub-arkose and there appears to be no significant variation in composition throughout the exposure. Freshly exposed faces are a creamy pink/white, with weathered faces a dull-grey.

To the west of the quarry, there is a fault that separates the Lickey Quartzite Formation from the younger red/orange marls of the Late Carboniferous-age Alveley Member (309 million years old). These marls are much softer than the quartzite and therefore erode quicker. This has led to the formation of the valley that separates Bilberry Hill from Beacon Hill. To the east of the quarry, the quartzite is separated by a fault from the Triassic conglomerates and sandstones of the Kidderminster Formation. 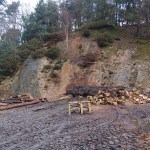 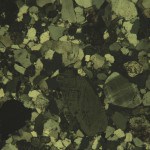 Lapworth, C. 1882. On the discovery of Cambrian rocks in the neighbourhood of Birmingham. Geology Magazine, 563-566