The quarry face at Longley Green Quarry is about 15 m high and exposes the boundary between the Aymestry Limestone and the Upper Ludlow Shales. The Aymestry Limestone at this locality occurs at ground level on the east side of the site, where it is dominantly composed of thinly bedded or occasionally nodular silty limestone. Thin beds within the unit contain abundant brachiopod fossils and a number of sedimentary features, such as laminations and wave ripples are preserved.

The Upper Ludow Shales overlie the Aymestry Limestone and are limey siltstones with occasional thin beds of very shelley limestone. A thin bed in the central part of the exposure is made up of dark grey siltstone that is very fissile (flakey) but this gives way above and below to the pale-coloured limey siltstones.

The boundary between the two units is marked by a break in slope that forms a step in the outcrop; however the boundary itself has been buried by rubble that has fallen from further upslope.

One of the more interesting subjects on the Western side is the presence of a small normal fault where a cm-scale displacement cuts the Upper Ludlow Shales on the western side of the quarry. The thinly bedded rocks on either side of this fault show deformation consistent with the downward movement of the north side of the quarry relative to the south.

Normal fault – A fault is a fracture in the Earth’s crust along which movement has occurred. A fault with a normal sense of motion formed as a result of being pulled apart but crustal forces. 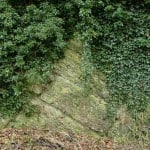 General view of quarry face, showing beds of Aymestry Limestone dipping down towards the right of the image. 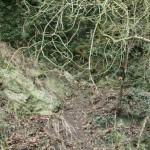 The change in slope angle that marks the boundary between Aymestry Limestone and the overlying Upper Ludlow Shales.