Nash Scar Limestone contains calcareous algae and bryozoan fossils within a coarse, calcite-bearing groundmass.  These algal limestones accumulated in an area of shallow sea, resulting from uplift along the line of the Church Stretton Fault.  The limestones are equivalent to the Woolhope Limestone.

The overlying Coalbrookdale Formation mudstones were formerly exposed to southeast of the site. 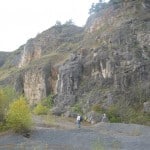 General view of the exposure at Nash Quarry. 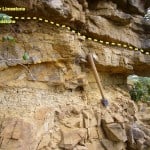 The boundary between the interbedded sandstones and shales of the Folly Sandstone (bottom) and the overlying Nash Scar Limestone (top).