Local Geological Sites(LGS) are important because the local planning process gives them some protection against damage and development, so we are pleased to announce that eight sites have been newly designated in 2020.

To achieve LGS status for a site, we follow a strict process. Proposals for sites are first prepared and submitted, then a formal designation meeting is convened, when the merits of the sites are judged against predefined criteria.  Those that meet the required standards are submitted to local planning authorities for approval and for inclusion in their databases of protected sites.

The newly designated sites expose a variety of rock and geological features, all of them have public access and in addition to their scientific value, they offer great educational opportunities. They can also be very atmospheric, awe-inspiring places to visit. Please be aware that in some cases, clearance work is needed before the sites will be truly welcoming.

If you do visit, please remember that these are protected sites. It is important not to remove any in-situ material and to avoid any damage or disturbance.

This post includes just a brief summary of each new LGS. More information about these great sites will be appearing in our future newsletters and in our ‘sites to visit’ page.

This narrow deep quarry was a major local source of aggregate until its closure in the 1920s and provides vivid testament to the social history of the area. It extracted the full thickness of the steeply dipping shaley Aymestry limestone. Fossiliferous rubble of this Silurian age limestone remains on the wooded quarry floor with conspicuous brachiopods and there are also platforms where the adjoining Ludlow Shales were dumped after quarrying.

Other protected sites in the vicinity have more extensive exposures of the same formations and are designated for their scientific value, but none of these is accessible for educational visits or to the public. Abberley Parish Council, with the full cooperation of the landowner, define this area in their proposed Neighbourhood Plan as a Local Green Space. They warmly welcomed the opportunity to protect it as a Local Geological Site because of its educational, historical and aesthetic value. 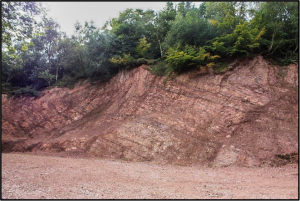 The Barnt Green Road Quarry offers the best exposure of the Lickey Quartzite to which the public have open access. The public viewing area is provided with three interpretation panels to explain the geology and ecology. The quartzite sandstones and mudstone were deposited between 485 and 444 million years ago in the Ordovician Period, in the shallow coastal waters of the Iapetus Ocean which separated southern Britain from the North American continent, which then included Scotland and Northern Ireland. The folding seen in the quarry has been so intense as to turn some of the strata upside down. This type of folding has not been identified anywhere else in the Lickey Quartzite formation, and is believed to have been a consequence of the jostling of tectonic plates as the continents collided and the Iapetus Ocean closed.

In the south-east corner of the quarry there is evidence of a subsequent event in which the area was subjected to stretching. The rocks have fractured, and as the blocks on either side of the fault have slid past one another they have been broken up into the small angular fragments that constitute the rock type breccia. Unusually the fault can be seen to have ‘jumped’ sideways to find a new path of weakness to follow.

This site is one of our ’Sites to Visit’. It is described and generously illustrated in a recent post. 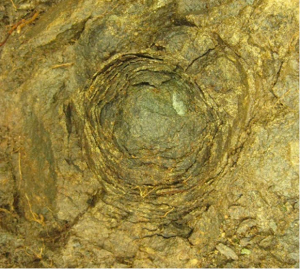 Widening of the A438 road near Bronsil has extended an existing exposure of igneous rock of probable Ordovician age.  The exposure is 70m long, up to 6m high and about 23m is relatively clear of vegetation. There is a 2m wide verge from which to view it and a layby opposite. Many dykes can be found intruding the early Ordovician shales between Whiteleaved Oak and the Eastnor obelisk and three distinct types have been recognised. The type at this site has been described by geologists as a ‘coarse-grained, ophitic olivine diabase’ and this is one of only two good exposures. The other exposure is in private ownership and shows quite different features of the rock. This exposure is unique within the Malverns in showing very good examples of ‘onion-skin’ weathering, where layers of rock are seen to be peeling away from a spherical body embedded in the rock face. 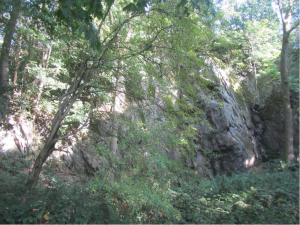 This highly atmospheric site in the north Malverns is of great value for education because its rock faces are safe and easily accessible. The faces are typical of the Malverns Complex and show a variety of rock types, with veins, intrusions, mineralisation and shearing.

The location is also the site of a wedge of Silurian rock that has been faulted downwards into the Malvernian Complex rocks and is important to scientists in showing the nature of the western boundary of the Hills. The wedge was exposed in the last century by a trench and is well documented in the BGS Worcester Memoir. The trench has now been filled in, but it is important the site remains intact for future investigation. A light annual clearance programme will keep it in good condition.

Dogleg Quarry, also known as Hayslad quarry forms a 160m long chasm, a few metres wide cut into the west side of the Malvern Hills, where microdiorite, a fine-grained igneous rock has been extracted. Although the site is now much overgrown, technical accounts record many interesting features, access is very good and clearance work is planned. The microdiorite had intruded to form a dyke within the coarse-grained host rocks of granite and darker diorite which at this site are amongst the most altered seen on the northern Hills. Numerous fault lines run through the site showing where the rock has been affected by earth movements at different times. There is much evidence of brittle fractures as well as mineral alteration and ductile deformation in the rocks. The faults cut across and are crossed by a variety of different veins and minor intrusions, and good examples of less common minerals such as epidote are found here. 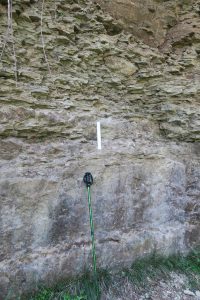 As a SSSI, designated for its geology, this site already enjoys protection for its scientific value. It is also significant locally for its educational value. The site is the type location for the boundary between the Wenlock and Ludlow divisions of geological time, so provides a clear object lesson in how the geological timescales are determined and compared across different locations worldwide. A good range of fossils, including large heads of chain coral can be found and distinctive changes in fossils occur through the succession. There are also layers of volcanic ash that give a precise chronological dating for the boundary. The site is publicly accessible.

This disused quarry near Whiteleaved Oak is now a small carpark and exposes the best accessible example of the Hollybush sandstone: a rock of Cambrian age found only in the local area. It is a very tough, very fine-grained, micaceous rock with no obvious bedding. The north and west faces are well exposed with a shear zone in the corner between them. The two faces show an interesting difference in colour due to infiltration of fluids from the very different rocks that used to overly them: dark Cambrian shales above the north face, and Triassic mudstones above the east face. 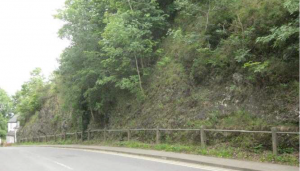 South side of Wyche Cutting

The Wyche cutting lies on one of the major faults that divide the Malvern Hills into a number of distinct blocks. This site not only demonstrates the change of geology across the fault, but also exposes a wide range of classic features in the rock created by the massive forces that moved it at different times in its history. It is said to be one of the few easily accessible, good exposures in England where such effects can be seen. Pseudotachyllite is present as dark veins in the cutting, a rare form of rock produced by frictional heating during relatively shallow rock movement. Of particular interest is the foliation in the rock, a form of deformation that occurs at great depth and indicates the direction of the forces acting upon it at the time. Foliation can be seen in the diorites south of the cutting, both in the nearby quarry and on the hilltop and it shows that forces acted in quite different directions within this very small region. The site is readily accessible for scientific and educational purposes. 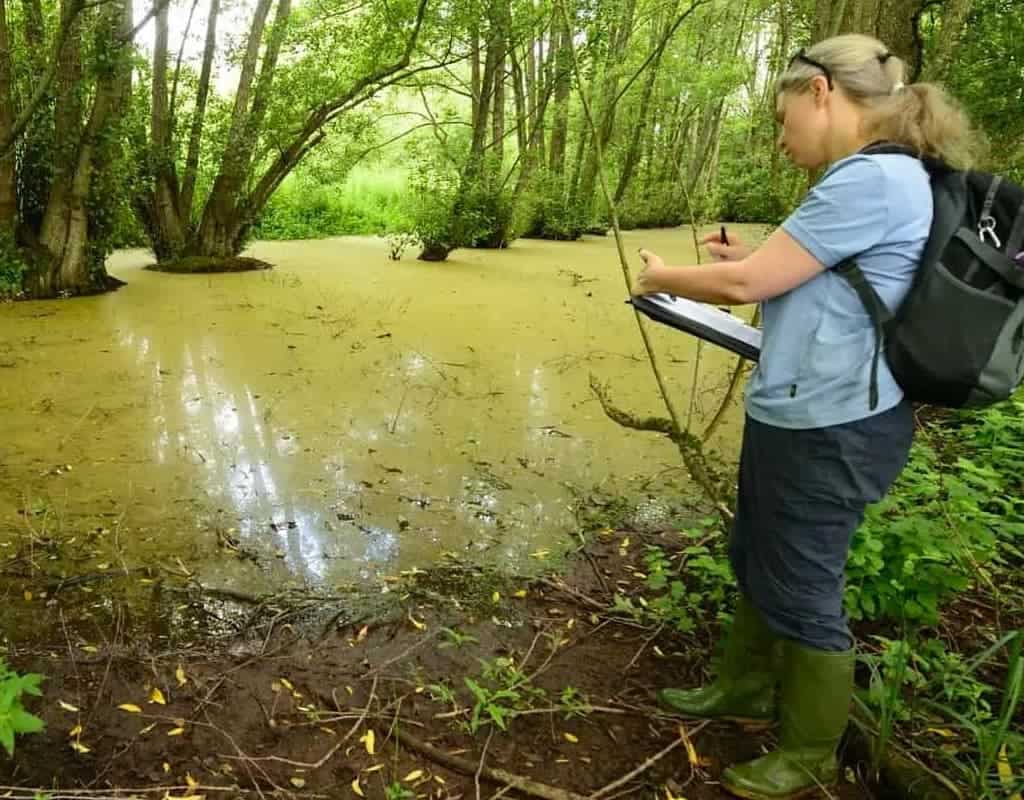 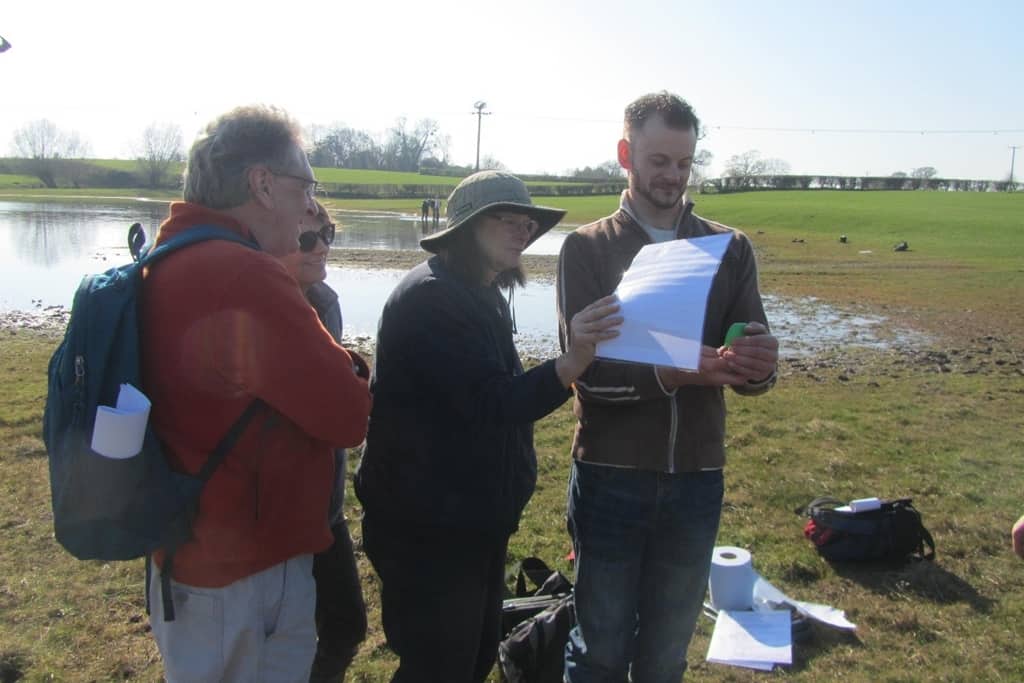