Oolite – rock made up of ooliths, small spheres made up of successive concentric layers of calcium carbonate which accumulated as the ooliths rolled on the sea bed. 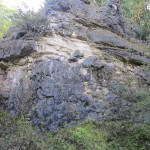 Sandstone lenses seen at the south east end of the quarry north of King Arthur’s cave. 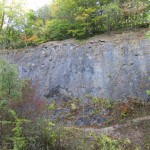 East face of quarry showing Gully Oolite Formation. There are faint traces of current-bedding. Gully Oolite is overlain by thinly bedded Llanelly Formation at the very top of cliff. 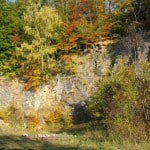