The Suckley Quarries are a line of quarries that run in a north-south direction through the east ridge of the Suckley Hills.  This ridge is defined by the Much Wenlock Limestone Formation, which is more resilient to weathering and erosion than the Upper Ludlow Shales Fomation to the west and therefore forms a well-defined ridge line.  The beds generally dip down towards the west, but this varies in places due to fault movements in the area.

The Much Wenlock Limestone at these sites is a grey, nodular limestone with a yellowish weathering colour. Some beds display lamination and small beds of shaley material commonly separate thicker beds of nodular limestone. Four different varieties of brachiopod fossil have been documented including Atrypa and Leptaena. Crinoid ossicles are common throughout the unit and rare bryozoan fossils are also present.

A variety of features are seen in these quarries, including current bedding, long crinoid stems (which are usually very fragile) and micritic limestone. These indicate a range of depositional environments ranging from energetic currents in shallow water to more placid, deeper water conditions.

These sites have produced stone for a variety of uses, aggregate being the principal product.  The nodular nature of the limestone certainly makes it useful as an aggregate, although more massive beds have been used locally as a building stone. The quarries may have also produced limestone for lime making, however the complete absence of lime kilns in the area suggests that this was not the principal purpose of the quarry.

Crinoid ossicle – Small circular discs with a hole through the middle that represent a single segment in the stalk of a sea lily animal. 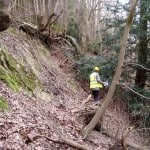 The Suckley Quarries are a series of steep-sided, linear trenches dug into the Much Wenlock Limestone. 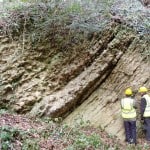 Beds of steeply dipping limestone and nodular limestone in the Much Wenlock Formation. 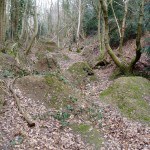 Piles of overburden (unusable soil and rock that was removed during quarrying) at one of the Suckley sites. 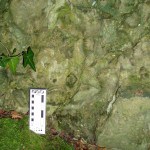 Detail of the nodular limestone that is predominant at the quarry. 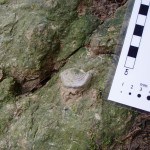 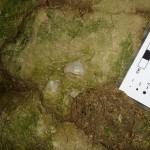 Reeve, F.A.E., 1953, ‘The structure of the Silurain rocks of the Malvern and Abberley hills Worcestershire’, PhD thesis, University of Birmingham, Birmingham, pp. 286.