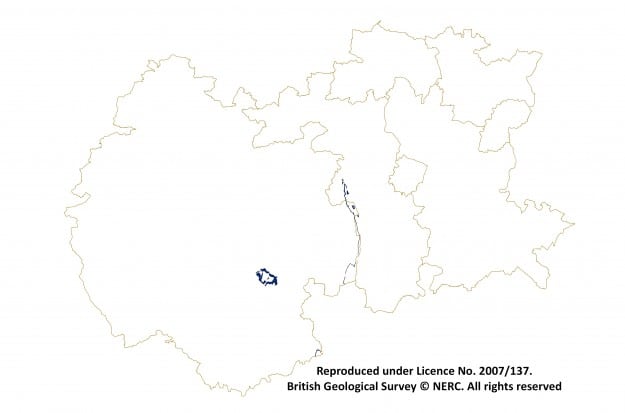 In Worcestershire the outcrop of Silurian rocks generally follows a north-south linear trend, beginning just north of the Malvern Hills and continuing along the central and eastern half of the Teme Valley, before splitting into two outcrops around Abberley. The Woolhope Limestone is found in the Woolhope Dome , to the west of the Malvern Hills and at May Hill. The Nash Scar Limestone found in northwest Herefordshire is thought to be contemporaneous with the Woolhope Limestone.

The unit conformably succeeds the May Hill Sandstone Group and is characterised by pale grey, nodular limestone and calcareous mudstone which weathers buff and olive-grey. The Woolhope Limestone has a restricted fauna, dominated by tabulate corals and brachiopods. Broken shell debris is common in the unit, suggesting deposition in shallow water with vigorous wave action.

The Nash Scar Limestone (also known as the Dolyhir Limestone) found in northwest Herefordshire within the area of the unmapped BGS 1:50000 Knighton Sheet (180) is believed to be equivalent in age to the Woolhope Limestone. It is a crystalline, fossiliferous limestone which developed in proximity to the Church Stretton Fault System. This created an area of shallow water further west than the other outcrops of limestone of this age. The lower boundary unconformably overlies the Folly Sandstone.